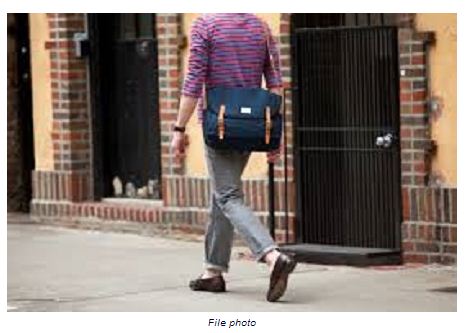 A Nigerian Honest Man Finds Lost Items and Returns them in Imo State has had his honesty rewarded with a something great.

Mr. Williams Nwosu, a house keeper, has been rewarded with a brand new Honda Civic for exhibiting a rare display of honestly when he returned an Ecolag bag belonging to a UAE-based businessman, Mr. Chidiebere Ubani.
According to Punch Metro, it was learnt that Nwosu had picked the bag at Sam Mbakwe Airport in Imo State, while he reported the incident to Ubani’s bank, which contacted him to come and collect the bag.
Items found in the bag are brand new and expensive mobile phones, a passport with Dubai residential permit, a laptop, a Diamond Bank cheque book, an undisclosed amount of money both in foreign currencies and naira amongst other valuables.
In appreciation for his kind gesture, Ubani, who was amazed at the level of honesty shown by Nwosu, gave him a brand new car.
While handing over the car key to Nwosu in his office, Ubani said though the bag contained some valuables, including his business documents, what moved him into rewarding the man was his show of exceptional honesty in this generation when honesty is seen as old-fashioned.
He added that he rewarded Nwosu to encourage Nigerians to live an honest life and to also show people that honesty remained the biggest virtue anybody could imbibe.
Ubani enjoined the youths to learn from Nwosu who, despite his condition, decided not to take what does not belong to him.
In his response, Nwosu, a father of five, said he lost his taxi driving job in Lagos and relocated to Owerri when he could no longer cope with challenges of life without a job to take care of his family.
He said he was full of surprises and that never in his widest dream did he envisage owning a car after he lost his job, adding that he was only cleaning his relative compound in exchange for an accommodation.
When asked why he did not tamper with the contents of the bag, he said he was not brought up in that manner, adding that what he did was what he was known for all his life.
He said, “No matter the degree of hardship, I can never steal or take what does not belong to me, I thank Mr. Ubani, whom God had used to restore me back to business, I pray that God will bless every of his endeavour.”
Nwosu advised Nigerians to embrace honesty, hard work and eschew greedy lifestyle.
“Our people should always put God first in all they do; everyone should use me as an example of what the result of honesty should be,” he added.
Category : Event Gossip News
PreviousWatch Unbelievable Video: You Won’t Believe What 2 Men Did After They Found Out They Were Dating the Same Girl
NextJAMB Suspends 2017 UTME Registration… See Details