AB ISONG NEW AGE, NEW ALBUM – NEW MUSIC ALERT: PROMISE KEEPER
Mummy
April 15, 2017
11:17 am
According to this gospel musician, Ab Isong, on His Birthday Today  spoke to you correspondent in Uyo.
Ab.Isong who’s full name is Abraham Isong. is a singer, worship leader, relationship coach, gospel music promoter, actor, Senior Pastor Liberation Word Int’l Christian Centre and a prolific song writer, Currently serving as Publicity Secretary Fellowship of Gospel Music Ministers of Nigeria (FOGMMON) He is also the director of Programs  IGAF INT’L and the int’l President/Founder of BAM (before and after marriage) a relationship network that nurtures both married and singles. He is also an on air personality anchoring a high profile gospel music program called GOSPEL MUSIC CHART on 90.5fm and GOSPEL MUSIC HYPES on SMILE TV. Helping many young gospel artistes to be heard and a regular face on television 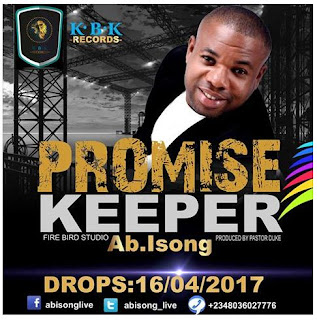 With over 55 songs in his repertoire, Ab.Isong! who is passionate about using music as a tool for spiritual and national rebirth, has released 3 albums and over 13 singles.  Some of His videos are enjoying broadcast on several national and international media and are highly in demand within and outside Nigeria.

He said Last year about this time GRATITUDE came forth.
The song came when I was practically going through the storm.
Yet I was grateful and in the mist of my gratitude God promised seeing me through.
Barely 365 days after, He has kept to his words!
I'm living now in my Glory days!
He added that the Song PROMISE KEEPER is a song of gratefulness, it has a flare of reggae, tecno and soul combined together.
Few lyrics but with deep interpretations, Yes in the spirit of AKWA IBOM DAKKADA WITH UDOM and to support what Our Able S.A on Entertainment Utang Akwa Ibom is doing, I had to use and promote my dialect and culture in this piece of music while having my brother and honorable speaker Onofiok Luke at heart, I couldn't help but to make the whole of Nsit Ubium proud.
Recorded at FIRE BIRD studios with Pst Duke Isangadighi on the mix, the mid-tempo music is a must have.
you click HERE TO LISTEN
Stand by me as PROMISE KEEPER will be OFFICIALLY unveiled this Sunday April 16 during my Birthday Concert.
My name is Ab.Isong
Category : Event Gossip
PreviousSo Heartbreaking!Boyfriend Mourns on Facebook Over a Beautiful UK-Based Nigerian Student Death During Surgery, (Photos)
NextClash in Ekiti: Fayose Imposes Curfew After Two Die