The wife of a renounce Nigerian pastor,  Lizzy Johnson Suleman, Apostle Suleman’s wife has come out to defend her husband over the sex scandal that has gone viral on the internet.

She claims that the picture of her husband with the Canadian based accuser was photo-shopped.
And that she believed this because she was a graduate of mass communication.
Her husband she insisted, is not promiscuous. 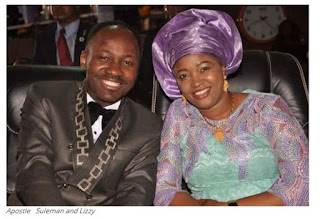 A lady, Stephanie Otobo broke the internet with stories of her secret sexual dalliance with the founder of Auchi-based Omega Fire Ministries, Suleman.

She has also sued him claiming N500 million as damages. Her lawyer is Festus Keyamo.
Just like Lizzy, Apostle Suleman has denied the allegations from the assumed mistress.