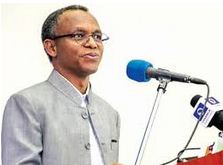 On Monday, Kaduna State Governor, Nasir el-Rufai, accepted the challenge of the Speaker of the House of Representatives, Mr. Yabubu Dogara, by releasing details of his security vote, salary and allowances.
The governor also released the disbursements to the 23 Local Government Areas in the state.
El-Rufai, while releasing the details, again challenged the National Assembly members to do likewise.
The governor said the federal legislature had the most opaque budget in the country, adding that Nigerians had spent N1tn on the lawmakers without knowing the details.
The governor had, at the National Assembly retreat in Kaduna on Friday, dared members of the federal lawmakers to disclose details of their N115bn budgetary allocation, salaries and allowances.
Dogara was reported, on Saturday, to have challenged el-Rufai and other governors to publish their security votes.
In a statement on Monday by his Special Assistant on Media and Publicity, Samuel Aruwan, el-Rufai said  he had nothing to hide.
The February pay slip of the governor indicates that his monthly  pay  was N470, 521.71 after deductions.
According to the pay slip, details of the monthly pay include basic salary, N185,308.75; hardship allowance, N370,617.50;  gross pay, N555,926.25, PAYE N85,404.51; total deduction amounts to N85,401.51 while the net pay stands at N470,521.74.
The governor noted that the amount might appear puny, but it reflected what the Revenue Mobilisation Allocation and Fiscal Commission approved as the salary and allowances of governor “adjusted to reflect provision in-kind of accommodation and transportation.”
He said he accepted Dogara’s challenge as a necessary step to improve and strengthen the nation’s democracy.
El-Rufai stated that he had consistently made the budget of the state public unlike the National Assembly budget  “which is a single line item of over N100bn  that divulges zero information or details.”
On the local government funds, the governor referred the lawmakers to the online portal, www.openkaduna.com.ng,for relevant information.
“The proposed 2017 local government budgets, currently before the State Assembly, are also already online on the same website, and on www.kdsg.gov.ng. Approved State Budgets 2016-2017 can be found on http://openkaduna.com.ng/ Budget/approved-budget.
“We invite the Right Honourable Speaker to download and peruse at his pleasure,” the governor added.
As regards the Kaduna State security vote, El-Rufai stated, “As our Kaduna Comprehensive Security Architecture  outlines, the state is directing security spending on four pillars:  justice, technology, community engagement and support to security agencies. The 2017 budget details specific amounts:
“N1.5bn for the procurement and installation of CCTV cameras for monitoring and surveillance towards reducing criminal activities within the metropolis.
“N193m for procurement of geo-position interceptor and location of GSM UMTS System to check the trends and intercept/locate kidnappers’ GSM calls.
“N265m for the procurement of drones/unmanned aerial vehicles to identify locations of armed bandits in our forest reserves across the state and the establishment of a forensic laboratory to assist in determining substantial evidence in cases that otherwise proved difficult in the past.
“N2.6bn is allocated in 2017 to support the network of federal security agencies in Kaduna with communications, logistics and materiel.”
The governor insisted that the call to #OpenNASS was not a personal one, adding that “it is one which the leadership of the National Assembly owes to all Nigerians.”
He noted that it was disingenuous for the Speaker to use state government budgets as the excuse for the opacity of the National Assembly budget.
El-Rufai said in 2016, the National Assembly budget for its 469 members was bigger than the capital budget of Kaduna State, with close to 10 million inhabitants.
The Kaduna State governor added, “It is also larger than the entire budget of several Nigerian states. Indeed, over the past 10 years from 2008, the National Assembly, as an institution, has cost the country over N1tn without any detail on how this amount was allocated and spent.
“There is no state government in Nigeria with a budget nearly as opaque as that of NASS. In March 2016, this National Assembly, led by its Chairman, promised to provide a detailed breakdown of the National Assembly budget. Nigerians are waiting,” he said
The governor said he would like to reiterate his call for the NASS leadership to do the same and disclose the details of the National Assembly budget, and the salaries and allowances of its leadership to Nigerians.

In its reaction, however, the House said el-Rufai was trying to be clever in publishing some items on his security vote the way he did.
The Chairman, House Committee on Media and Public Affairs, Mr. Abdulrazak Namdas, told The PUNCHon Monday that Dogara’s charge to el-Rufai was that he should champion the cause of transparency in all arms of government, beginning with the judiciary, the executive and also to extend it to the governors.
Besides, Namdas added that in the presence of el-Rufai, the Speaker directed the bureaucracy of the National Assembly to publish the budget of the legislature, beginning with the 2017 budget, when passed.
Namdas added, “He also talked about the security votes of local government councils; how are the governors spending funds? That has not been addressed.
“But, what is important is that the National Assembly bureaucracy has already been directed to publish the details of the budget.
“Dogara gave this directive right in the presence of el-Rufai. The budget will soon be passed.”
Senate budget details will be made public after appropriation bill passage –Saraki
The Chairman, Senate Committee on Media and Public Affairs, Senator Sabi Abdullahi, could not be reached to speak for the upper chamber.
But President of the Senate, Senator Bukola Saraki, reiterated his position on January 30, 2017, that the budget of the National Assembly for 2017 would be opened to the public.
Saraki had said a mechanism that would make subsequent budgets transparent had been put in place.
When contacted, the Special Adviser to the President of the Senate on Media and Publicity, Mr. Yusuph Olaniyonu, had referred The PUNCH to the spokesman for the Senate.
But when reminded that Saraki had said the National Assembly would publish its budget this year, Olaniyonu told one of our correspondents that the Senate President still stood by his earlier position.
He stated that the budget of the legislature would be made public after the passage of the 2017 Appropriation Bill.
Olaniyonu stated, “Yes, they are working on it and it will be made known (to the public). At least, the national budget for 2017 has not been passed. When it will be passed, the details of the National Assembly budget will be passed along with it. That is the plan by the Senate President.”
Earlier in January, Olaniyonu had said the 8th National Assembly would introduce what would be called e-parliament.
He had added that contrary to the public opinion that lawmakers at the National Assembly solely spent the N115bn annual budget of the legislature, the amount was meant for other arms of the Assembly.
These, he said, include the National Assembly Management, the Senate, the House of Representatives, legislative aides, public accounts committees of the Senate and House, general services, National Assembly Service Commission, Nigeria Institute of Legislative Studies and service order votes.
Category : News
Previous489 for street begging arrested in Kano
Next“MY FIRST SEXUAL EXPERIENCE IN 2004” -.Sirjames Finally Speaks Out