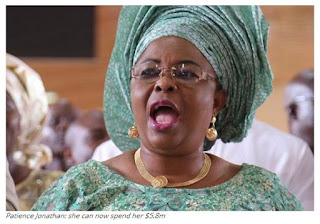 Bank stops Patience from withdrawing money (Unfrozen $5.9m)
Patience Jonathan, the wife of former President Goodluck Jonathan, was barred by the Economic and Financial Crimes Commission (EFCC) from withdrawing money from a $5.9m account with Skye Bank, which was ordered to be unfrozen by a court last week.
This is just as the EFCC has begun fresh move to ensure that a separate $15m, which was traced to Patience, is permanently forfeited to the Federal Government.
It was learnt, on Monday, that Mrs. Jonathan was barred from operating the $5m account after a Federal High Court, sitting in Ikoyi, Lagos, ordered that the restriction on the account be lifted.
A reliable source told Our Team that the EFCC was able to obtain a ‘stay of execution’, a court order obtained for the purpose of suspending the execution of a court judgment.
The source said, “Shortly after the judge ordered that the account be unfrozen, the EFCC quickly obtained a stay of execution in order to prevent her from having access to the money.
“The EFCC communicated with the relevant authorities at Skye Bank that it was important that she wasn’t allowed to withdraw the money or else, the whole purpose of the freezing would have been defeated.”
Patience Jonathan: Group slams N5bn suit on EFCC
In a ruling on Thursday, Justice Mojisola Olatoregun set aside the ‘No-Debit Order’, which the EFCC had earlier placed on the account on allegations that the $5.9m found in it was proceeds of crime.
The judge upheld the contention of Patience’s lawyer, Mr. Ifedayo Adedipe (SAN), that his client’s account was unlawfully frozen by the EFCC.
Adedipe had urged the court to unfreeze Patience account on the grounds that she was not a party to the suit leading to the freezing order.
Citing judicial authorities, Adedipe contended that the suit was an abuse of court processes, contending that the court had no jurisdiction to make an order against someone who was not a party in a suit filed before the court.
Following the favourable court order, Mrs. Jonathan’s lawyer went before Justice Mohammed Idris of a Federal High Court in Ikoyi, Lagos, praying the judge to order the EFCC to release to Patience the sum of $15.591m, which was seized from four companies by the anti-graft agency.
Justice Idris adjourned to May 8, 2017 to decide whether or not to grant the prayer.
Impeccable sources within the EFCC, however, told our correspondent that the EFCC would do everything possible within the law to ensure that the money was never returned to Patience.
The fresh move by the EFCC is coming about three days after President Muhammadu Buhari instructed anti-graft agencies to stop losing court cases and do more diligent investigations.
The source added, “In line with the President’s directive, we are changing our strategy to ensure that court cases are not lost. We are covering all angles. We understand that the war against corruption is one of President Buhari’s cardinal goals.”
In an interview with OUR TEAM on Monday, Mrs. Jonathan’s lawyer, Adedipe, admitted that the bank had not allowed his client to withdraw money from the account, but disagreed with the notion that the account had been frozen again.
He explained that Skye Bank, rather than comply with the court’s order unfreezing the accounts, was banking on the fact that the EFCC had gone on appeal to challenge the unfreezing of the account and had also filed a stay of execution.
Adedipe said, “After the account was unfrozen, the EFCC filed an appeal and a purported stay of execution and on that basis, the bank has not given us access. I have told the bank that it risks litigation. I will not say more than that for now.”
The EFCC had, in June last year, arrested four domestic servants, including a driver and a houseboy, who allegedly operated bank accounts belonging to Patience.
Sources within the anti-graft agency said the identities of the domestic servants were used in opening the company accounts.
The companies are Pluto Property and Investment Company Limited, Seagate Property Development and Investment Company Limited, Trans Ocean Property and Investment Company Limited and Globus Integrated Service Limited.
The four company accounts, which have since been frozen by the EFCC, have a balance of about $15m while another account, which bears Patience Jonathan’s name, has $5m.
Mr. Sammie Somiari, who deposed to an affidavit on behalf of Patience, said the former first lady was the owner of the money in the accounts.
She had revealed that she gave millions of dollars to the then Special Adviser to the President on Domestic Affairs, Waripamowei Dudafa, to open an account for her.
He, however, claimed that Dudafa opened five accounts for Patience and that only one of the accounts was in her name, while the other four were opened in the names of companies belonging to Dudafa.
Category : Gossip News
PreviousBBNaija: “Based on logistics” Okowa, Basketmouth, Olamide root for Efe
Next489 for street begging arrested in Kano