Drama in Court: My Wife Poured Kerosene Into My Keg of Palm Wine – Man Seeks Dissolution of Marriage
Mummy
April 7, 2017
11:40 am

Drama in Court: My Wife Poured Kerosene Into My Keg of Palm Wine – Man Seeks Dissolution of Marriage 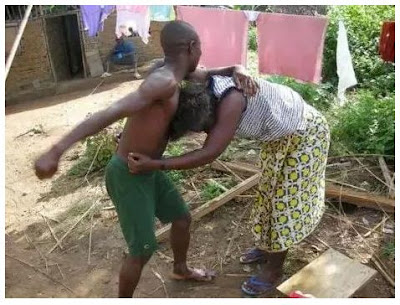 A 37-year old Palm wine tapper approached a Customary Court angrily to dissolve his three-year-old marriage with his wife over her alleged frequent attacks.

A 37-year old Palm wine tapper, Mr Femi Taiwo, on Thursday, appealed to an Ado-Ekiti Customary Court to dissolve his three-year-old marriage to his wife, Bose, over her alleged frequent attacks.
Femi in his application for divorce also accused his wife of disrespecting her in-laws and in the habit of constantly fighting him over trivial matters.

The petitioner said both his parents and family members had tried to intervene in their family feud but that his wife failed to listen to their counsel.
He further told the court that his wife on a particular day, after a minor misunderstanding, poured kerosene into a keg full of palm wine he prepared for sale.

Femi said he was tired of his wife’s constant quarrel and fight, adding that she had severally threatened to k**l him with a cutlass and a g*n.
The petitioner further accused his wife of infidelity, alleging that she frequently travels without any notification.
The father of one child told the court that because he could no longer tolerate her bad attitudes, he sent her out of his house in August of 2015.

He, however, said that the wife in September of 2‎015, came back begging for forgiveness, saying she was pregnant but that he rejected the pregnancy.
The petitioner further told the court that because of the intervention by members of her family, he accepted Bose back to his house.

He said Bose she refused to turn a new leaf, even after she gave birth to a son.
Mr Abiodun Taiwo, a 56-year old farmer, who testified as the petitioner’s witness, also told the court that the respondent was a trouble maker.
He said although he severally settled their disputes but that the respondent was stubborn and in the habit of not heeding to advice.

Abiodun appealed to the court to grant the petitioner’s application for dissolution of the marriage ”to prevent my younger brother from premature death.’’

The President of the court, Mrs Olayinka Akomolede, ordered the petitioner and the respondent to come to court with their witnesses on April 4, the adjourned date, for further hearing.
-NAN

Category : Uncategorized
PreviousPolice Van Damaged After Colliding With A White Hilux In Uyo
NextApostle Suleman’s wife speaks out- Not my husband – WATCH VIDEO