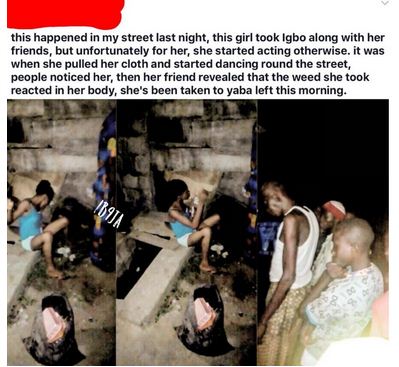 Nigerian Girl Runs Mad After Her Friends Gave Her Weed To Smoke.

Lady dragged to the Federal Neuro Psychiatric Hospital, Yaba, Lagos, after an adverse reaction to marijuana
A Nigerian lady has gone crazy after she allegedly took an abused drug (Marijuana).
According to an Internet user who shared the epic story he wrote


‘This happened in my street last night, this girl took ‘Igbo along with her friends, but unfortunately for her, she started acting otherwise.

It was when she pulled her cloth and started dancing round the street, people noticed her, then her friend revealed that the weed she took reacted in her body, she’s been taken to Yabaleft this morning.’
Category : Gossip Jokes News
PreviousShe Dumps Her Little Child By The Roadside After Pastor Told Her It Was A Snake In Delta State
NextNigerian Twin Sisters Marry Identical Twin Brothers In Akwa Ibom