Hon. Elder Iwok Takes Abak People To God In Prayer
Mummy
April 9, 2017
9:39 am
STOP AND PRAY
By Abbas Umoh
"... ever since I stepped into the Akwa Ibom State House of Assembly as the representative of the good people of Abak, l pledged to take Abak to God in prayer monthly, a vision l am not ready to give up upon so soon . And, it has been God all the way ". Elder Iwok asserts in today's prayer meeting, as he outlined the gross benefits of stopping to pray in its most fascinating way.
Taking Abak to God in prayer in a Monthly Solemn Assembly over the past six years have been an incredible exercise. It has not also been an exercise in futility, but a one stop exercise in which God has used to rain down blessings, broker peace and tranquility in Abak.
God has used the monthly Solemn Assembly so significantly in touching and transmogrifying many lives both physically and spiritually. The exercise has brought tremendous blessings to the land of Abak in no small measure.
The Solemn Assembly has dragged the hand of God upon the people and even the people are better testimonies to this sacred truth. Elder Iwok hints.
Read: Akwa Ibom: 14th Graduation Ceremony of the Civil Service Training Centre.
HIGHLIGHTS
Today was the easter version of God's Agenda Family monthly prayer meeting (Solemn Assembly), held at the instance of Rt. Hon. (Elder) Friday Iwok , in his Abak country home.
In today's Solemn Assembly, over 150 youths who have been trained on various vocations, handwork and skills returned to show appreciation to God by showcasing what they have learnt in practical terms. A show of gratitude that permeated the heart, one could feel it on their faces.
They appreciated God for using Elder Iwok to put smiles on their faces, give their lives a meaning and a possible direction. Saying that, "we were a people without direction and skill, but today we can bake cakes, sew clothes, make perfumes, manufacture paints all in commercial quantities and we are invariably making a living out of these skills, may God bless Elder Iwok".
In the same vein, students who are beneficiaries of the FREE JAMB CLASSES organized by Rt. Hon. (Elder) Friday Iwok, also trunked into the venue of the Solemn Assembly in their numbers to salute God for using Elder Iwok to carve out a niche for them.
Read: JAMB extends Registration Date
They appreciated Elder Iwok for being obedient to the call of God upon his life by way of accepting to represent Abak, at that, in an unprecedented manner. In their words, "education is the only legacy that is trans generational, and when bequeathed upon a people it's impact is felt eternally, so, we thank God for using Elder Iwok to provide for us a platform that would sharpen our lives in no less a dimension".
The women were not left behind as they danced and appreciated God for a man with a good mien at the helm of legislative representation in Abak, which showed off ultimately in their beautiful dance steps.
God's Agenda Brass Band were on top of their game, spicing up the entire atmosphere with melodious tunes of worship and electrifying praise. It was really a moment of tremendous appreciation to God.
The Coordinator of God's Agenda monthly prayer meeting, Pastor Ekerette, urged the people to emulate the good dispositions and quantities of Elder Iwok by dealing with people in love. That love is the only quality that depicts one as a Christian. In his message, he posited that if three out of every five people should show love to their neighbors as exemplified by Elder Iwok, that the world would be a more better place than it is right now.
He prayed for God's blessings upon Elder Iwok, that God should continue to strengthen him and give him more wisdom to continue with the good work of delivering Democratic dividends to his constituents.
The program was hugely attended by great men of God from far and wide, the youths, women, men and the political class. 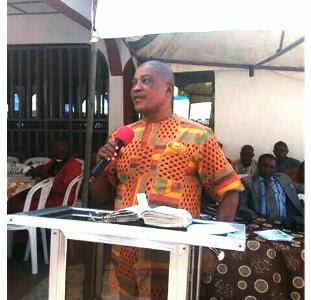 Category : News
PreviousJAMB Extends Date of UTME registration
NextMy wife Patience told me that it’s over between us!