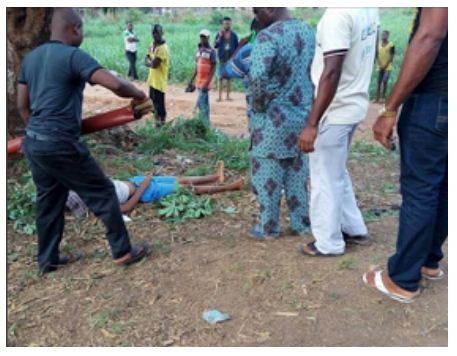 In Owerri, Imo state, A junior secondary student of Umuerim secondary School, died after falling from a mango tree.

According to Melissa, an Instagram user,  who shared the story, said the incident happened on April, 03, 2017.

The boy climbed the mango tree to pluck unripe mango, he fell the first time and was chased away by his senior.

When the seniors left, he went back and continued to pluck and that was when he fell the second time and died.
The boy is allegedly the only surviving member of his nuclear family and was living with his uncle before his death.

“Oh my God! This happened before me. A JSS2 STUDENT (name withheld) of UMUERIM SECONDARY SCHOOL OWERRI, IMO STATE. died yesterday(03/04/2017) around 3:00pm after he fell from a mango tree while trying to pluck the unripe fruits!..

The boy fell once and his seniors chased him, after they left, he decided to continue where he stopped which led to his terrible death thereby falling for the second time with his head.

According to Some individuals, they said ‘The boy don’t have parents, he is only living with his Uncle, therefore, he is the only surviving person in their family… MAY HIS SOUL REST IN PEACE…#Amen#…” Melisa wrote