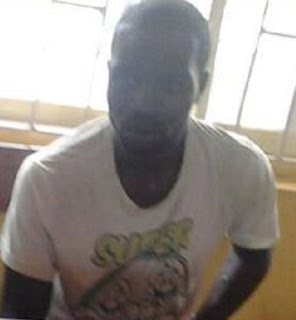 Man Who Attacked Okada Rider with Native Charm, GOD has finally expose him.
A motorcycle thief has been arrested after he attacked an okada rider with local charms in an attempt to rob him.
A 26-year old man Elias Adeyanju, popularly known as Bobo has landed in prison after he allegedly attacked and beaten a motorcycle operator, Ikot Onoja with native charm. Adeyanju was charged before Isolo Magistrates’ Court from where he was remanded in prison custody.

The incident happened at Odo-Olowu in Ijeshatedo area of Surulere, Lagos where the victim, Onoja operates as Okada rider.

P.M.EXPRESS gathered that Bobo and Onoja had a disagreement after Bobo asked Onoja to carry him for free but he declined and carried another passenger.

When Onoja returned to their park, Bobo went there and allegedly used the charm on him which makes him become motionless and speechless.

As the cyclist was hypnotised, Bobo allegedly battered him to his satisfaction before he undone the charm that make him come back to his senses.

By then, he had been wounded with various degrees of injury on his body.

Our correspondent gathered that it was other riders who saw what happened and knew Bobo had used charm on Onoja during the attack that held him and recovered the charm before handing Bobo to the police at Ijeshatedo Division.

Bobo was charged with assault and unlawful possession of charm under the Criminal Code.