Over 30 killed, Over 100 Injured After ISIS Bombed 2 Churches During Palm Sunday In Egypt 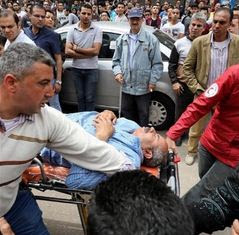 Isis claimed responsibility for two bomb blasts which struck Coptic churches in Egypt on Sunday, killing at least 47 members of the country’s largest religious minority as they celebrated Palm Sunday.

A blast in the city of Tanta, some 90 km north of Cairo killed 29 and injured 71 as they prayed at the Mar Girgis church according to the Egyptian health ministry. A second blast struck the Egyptian port city of Alexandria three hours later, killing 18 and wounding 35.

The bombings were the latest in a series of assaults attacks on Egypt’s Christian minority, who account for about 10% of the population and have been repeatedly targeted by Islamic extremists. The attacks on Palm Sunday worshippers comes weeks before Pope Francis is due to visit Egypt.
Video from the moment the blast struck the Mar Girgis church in Tanta just before 10am on Sunday showed the sounds of a choir gathered to sing hymns celebrating the Christian holy day, rapidly turning to screams of anguish and panic. Egypt’s state television later reported that a bomb planted under one of the pews ripped through the church.
“As I was passing by the Church, I heard a huge blast – I’d never heard a sound like this,” said Salah el Arby, a taxi driver in the town of Tanta. “People began running out of the church – shouting and afraid.”
“I believe this attack was the fault of the security forces,” he continued, citing a bomb previously diffused by police at Mar Girgis church in the town on the 29 March. “The police didn’t protect the church on an important day like today.”
Gruesome images circulated on social media in the aftermath of the blast, showing blood-stained woven palm branches, of the kind traditionally carried to celebrate Palm Sunday. Churches across Egypt had anticipated a higher than average attendance to celebrate the holiday. 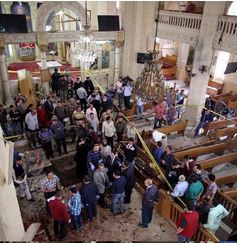 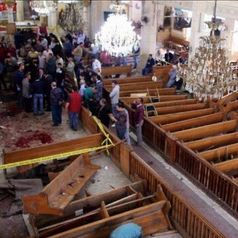 The second blast in the Egyptian port city of Alexandria struck St Marks Coptic Orthodox Church came three hours later. Egyptian state media reported that Coptic Pope Tawadros II was inside the church when the explosion struck, after leading worshippers in Palm Sunday prayers.
Three policeman were killed as they tried to prevent the suicide bomber from entering St Marks Cathedral in Alexandria, including one who embraced the suicide bomber just 100 meters from the Cathedral, preventing him from entering.
“Although there was a police constable who hugged the person holding the explosive belt to stop him entering the church, at the same time we cannot ignore the fatal mistakes by the security authorities that let these many attacks happen in a short time,” said Haitham al Hariri, a member of parliament with the Socialist Popular Alliance.
“If a bomb had been placed under the seat in Alexandria while the Pope was speaking as it was in Tanta, this would have been an even bigger disaster.”
Speaking to the Guardian from the Amiri public hospital where victims of the blast had been taken, he said: “I’m here in the hospital and people are angry at me – and angry at every official in this country. Families here are disappointed, frustrated and angry at everyone with no exception- from the head to lowest in the State.”
Despite the efforts of Egyptian security forces on the ground at the site of each attack, a day of intense violence left Coptic Christians asking whether they are safe in Egypt despite the government’s pledge to protect them.
The twin attacks, timed for a day of Christian worship, come following months of attacks on Egypt’s Coptic minority. St Peter and St Paul’s Church in the St Marks Cathedral compound in Cairo witnessed a similar attack in December 2016, in which a suicide bomber was able to enter the church, killing 29 people as they worshipped there by placing a bomb under a pew. When claiming responsibility for the attack in February this year, Isis vowed to “liberate” Cairo and threatened Christians across Egypt.
News of the bombings came as Francis was marking Palm Sunday in St Peter’s Square.
The pontiff asked God “to convert the hearts of those who spread terror, violence and death, and also the hearts of those who make and traffic in weapons”
The Egyptian president Abdel-Fatah al Sisi said in a statement that the blasts “will not undermine the resolve and true will of the Egyptian people to counter the forces of evil, but will only harden their determination to move forward on their trajectory to realise security, stability and comprehensive development.”
Christians have been increasingly targeted in Egypt following the overthrow of former Islamist president Mohammed Morsi in 2013. December’s attack was followed by increasing attacks on Coptic Christians in the Sinai Peninsula, causing some 250 Christians to flee the northern Sinai town of Arish.
“The problem is that there is a virulently anti-Christian sentiment among radical Islamists and there is unfortunately no failsafe way to protect everyone all the time- this is unfortunately true in countries around the world,” said H.A Hellyer of the Royal United Services Institute.
“It’s not the first time Christians in Egypt have witnessed attacks like this,” said Mina Thabet, a specialist in religious minorities at the Cairo-based Egyptian Commission for Rights and Freedoms. “They feel that no one is providing them with the necessary protection.”
“The government is responsible for their security,” he said. “Combatting terrorism isn’t just about force, it needs a new strategy – and Christians are paying the price.”
“Two explosions in the same day are organised,” he continued, saying that the close timing of the attacks suggests that the attackers coordinated with one another to plan the attacks. “It happened today and it could happen tomorrow,” he said.

Category : News
PreviousMUST SEE: Lady Destroys Husband’s Car In Retaliation After He Beat Her Till She Bled In Ijebu Ode, Ogun State
NextAlex Exposes Photos Of All The Ladies He Has Slept With