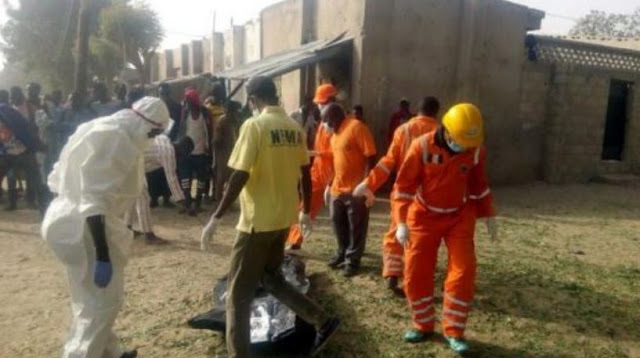 Along the Enugu-Onitsha expressway an accident which led to the death of a teacher while several students were injured and are in critical condition in the hospital.

The occupants of the ill-fated bus were teachers and pupils from Bayelsa who were on an excursion to the Ngwo Forestry in Udi Local Government Area of Enugu State.

The Enugu State Commissioner for Health, Dr Sam Ngwu, confirmed the accident and said it occurred at Ugwu Onyeama, near Enugu at about 8.45 p.m. on Wednesday.

NAN reports 40 people were involved in the accident, most of whom were between ages 7 to 15 years.
Ngwu revealed that the Bayelsa commissioner for health had been notified of the incident and was on his way to see the victims in Enugu.

“The victims were on an excursion to Enugu State.

Their bus fell into a gully and many of them sustained multiple fractures, lacerations, cuts and swellings on their faces.

Some of the victims were immediately taken to nearby hospitals in Ngwo, following the intervention of the State Government.

One of the teachers died in the process, which is a miracle, considering the severity of the accident,” Dr Ngwu said.

Ten of them were later transferred to the National Orthopedic Hospital, while others were moved to the University of Nigeria Teaching Hospital.”

The Enugu State Commissioner for Information, Dr Godwin Udeuhele, lamented the poor state of the Enugu-Onitsha expressway and the number of lives it has cost.

“We urge the Federal Government to expedite its intervention on that road to minimise loss of lives and property,” Udeuhele said.
Category : Gossip News
PreviousSEE PHOTO OF A pregnant woman goes to banks to deceive people with bulging tummy
NextIn Owerri A Student Dies After Falling From a Mango Tree