About 2000 students who were participating in a competition escaped a fatal fate at the collapse of a stadium which their games were supposed to be held.
The indoor sport hall of the U.J Usuene Stadium has collapsed after a torrential rainfall hits Calabar on Friday. 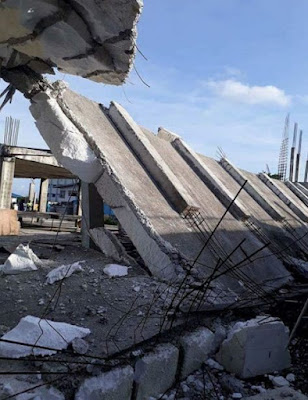 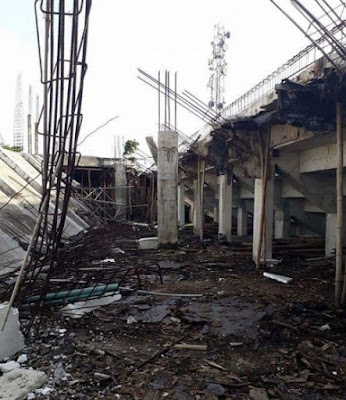 The part of the stadium was under construction for over two years and the contract was awarded by Former Governor Liyel Imoke to Uzuola Giwa-Amu. A contractor who absconded with nothing less than 2.5 Billion Naira.

Pictures released by the Director General of Sport Commission, Orok Duke, shows that the whole structure built to house at least 50 thousand people has only 8mm rods in the pillars and deckings platforms. 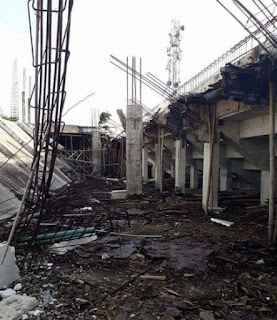 The structure which collapsed this afternoon, happened at a time when the children competition taking place in the stadium was suspended to observe the Easter Holiday. According to Orok Duke, more than 2000 children would have been crushed to death.

The shady side of the story is that Governor Ben Ayade is aware of the dubious contract and how it was a drain pipe project of the Liyel Imoke admimistration, but has refused to order an investigation into it. 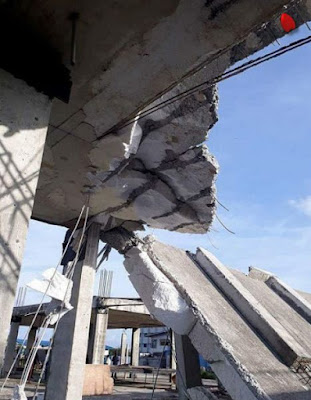 NEMA has called the State after hearing the sad development, but were relieved to note that no life was lost in the collapsed building.

I will be looking into a legal suit against the Cross River State government for remaining quiet over this dangerous project. I will be suing the State government of gross negligence, abuse of public trust, and lack of political will to order an investigation into this scam and to bring the contractor to book. I will be petitioning the contractor to the EFCC to return all monies dubiously gained through this contract.
Category : News
Previous(Watch Video) #BBNaija: Comedienne Helen Paul Finally Reconciles Bisola & Thin Tall Tony As They Hug Each Other
NextChurch Members: Dirty Fight Over Female Lover in Lagos (See Photo)